Choosing Film in a Digital Era with Katy Schilhab

Everyone has their “why” behind choosing to shoot film in a digital era. Here’s mine:

I recently found a box of photos from high school. There were so many photos of just nothing—in class, walking the halls, making faces, at parties. Not necessarily big events, just everyday photos. It didn’t occur to me at the time, but looking back, I remember always having one of those disposable cameras with me. All the time. I’ve always loved taking photos.

When I was in college, I took a photography class and fell in love with it (it was all film back then). I spent so many hours in the darkroom. I remember playing around with different techniques and developing methods. This time in the darkroom was so fulfilling. One day, I thought, I'll have my own darkroom. It was this particular time of my life that I took some of the most meaningful photos I've ever taken of my grandparents who have since passed away. These images are a treasure to me.

Once I entered the “real world,” work and life had me put the camera down for a while. After I had my daughter, everything had switched to digital photography. I bought a little point-and-shoot and shot tons of pictures of her. Eventually, I upgraded my camera and had to re-learn how to shoot with this digital equipment. It wasn’t the same as it had been for me in the past, and there was just something different about this new world of photography. But I kept shooting, discovered new editing techniques and began shooting friends, family and, of course, my two kiddos all the time. And just like that, my business was born.

A few years into my business, I began feeling so disheartened that this thing called photography just wasn’t “doing it” for me as it had done in the past. I spent so many hours behind a computer and hardly any time behind a camera (which was one of my favorite parts!). I realized that, to me, “Photography” had become “editing on a computer.” It felt like the very thing that had drawn me to photography had been stripped away. And I wasn’t fulfilled by what was left. (Side note: I have many super-talented digital photographer friends who blow me away with their skills. I do not consider digital photographers any less of a photographer than I am—this really comes down to personal preference.)

So guess what I did with my discontent? I dug out my old film camera I shot with in college and shot a roll. I poured myself back into film. It took a while to “re-learn” everything because yes, film is a different beast than digital [in the best way possible! :-)]. And I didn’t look back. Now, I shoot film almost exclusively for all my clients. I would say I'm about 90% film and 10% digital, depending on the circumstance. As an artist, film has completely given me new life. Let me tell you why! 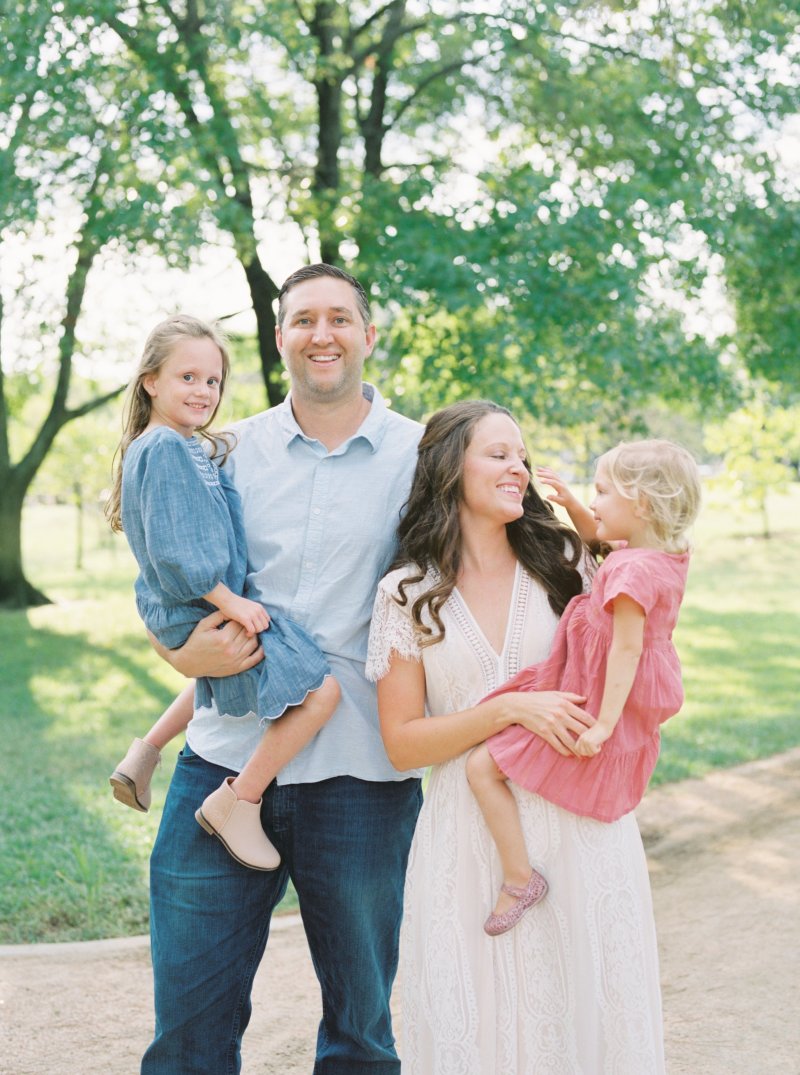 Hear me out here: Yes, you can edit a film image, but the most wonderful thing about film is how little (if any!) you need to edit. It's quite the opposite of digital in this way. All the work of shooting is in the front end: making sure your light/exposure is right is critical. While there is so much you can do to a digital image to make it an entirely different image than what you actually shot, you really don’t get that leeway with film. To some people, this is the reason they DON'T like film! But to me, it’s everything I love about it. Film is raw and imperfect and, to me, that's how I want to shoot.

The Colors + The Grain

It's true. There are colors on a film image that you just really can't get with digital. I know that sounds crazy given everything I just mentioned about editing, but it's true. And especially so when it comes to skin tones—my gosh, there is something about a baby and that creamy skin I can get on film that's near impossible to recreate on a digital image. It's yummy and delicious and oh man, I love skintones on film. Also, while most photographers try to get the most crisp, grain-free images they can, I just have a crush on grain. Grain is that slight “fuzz” you see on a film image. It's AUTHENTIC and lovely and vintage and I love it. To me, grain is like a human fingerprint. What if all our fingertips were just smooth and plain? That’s no fun. 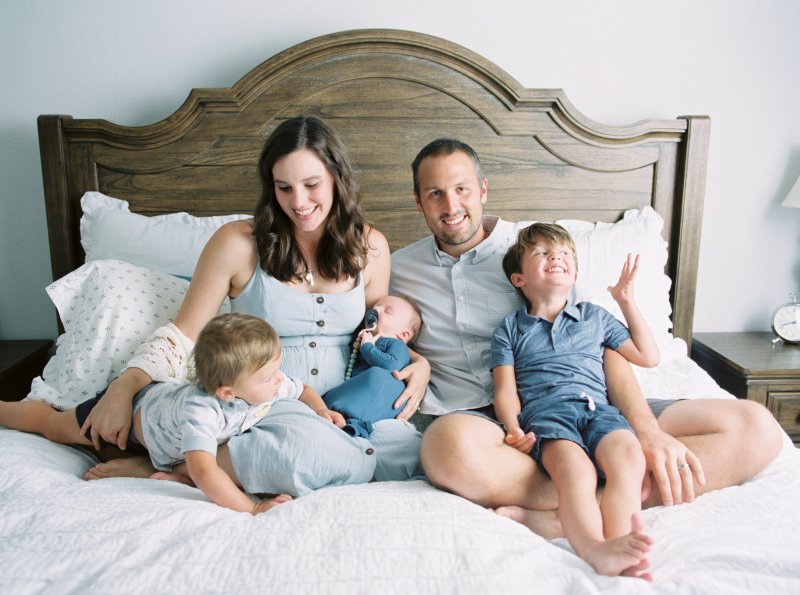 When I shoot a roll of film, I don’t get immediate feedback. I can’t “chimp” (e.g. what digital photographers do when they look at the back of their camera to make sure they got the shot). Sounds crazy, doesn’t it, that someone would LIKE not receiving instant feedback? But hear me out: Let's say I finish a session and I've shot 5 rolls of film. I send it to a professional film lab, @photovisionprints, who develops it for me and sends me the digital scans of my film. This wait, and the fact that I can't “chimp” the back of my camera and check myself during the shoot, causes me to be more INTENTIONAL when I'm shooting in the first place. I have to make sure I've got that connection with my subjects and engage with them in a way that will allow me to get the shot. I can't just fire off 200 shots and pray that I got one good one. (And honestly, that is a lot of what I did when I shot digital. Even then it felt all wrong to me!) Film forces me to be more present in the moment, which is always a good thing. Also, it takes 7-ish days (depending on the season) to get my images back from my lab. That waiting time can be torture, but in a weird way, I LOVE it. I've realized that the waiting really helps me have a bit of separation from the shoot to the final result. When I get the email from my lab that my images are developed and ready, it honestly feels like Christmas morning. (All my other film shooters know what I mean here! ;-))

My two favorite film cameras are beasts. They are heavy and bulky and, I swear, the minute I grip them I feel more creative. Instead of adjusting things after an image is shot, like I would with digital, I begin to create my image before I shot it. I choose which film stock I want to use (which is a whole other rabbit hole I could go down with you!), where I want to shoot, the light, the colors. Thinking about these things ahead of time allows my creative juices to flow more freely. I love playing around with different techniques and film stocks.

These are just a few things that I love about this medium and I honestly can say that I love what I do so very much. I pinch myself all the time that I can call this my “job” and it brings me so much joy and fulfillment! Thank you so much for reading this and hearing me out. If you think I'm nuts, that's ok, too. That’s the great thing about photography: we all get to choose our own favorites. This just happens to be mine. If you have any questions, I'd love to answer them! Or chat with you about any of this! I love talking about film! [Just ask my film friends, whom I geek out with on a regular basis :-)]