Aperture, Shutter Speed and ISO work together to determine the exposure (overall lightness or darkness) and overall aesthetic of a photograph. The "Exposure Triangle" is a way of demonstrating how these three variables work together in direct correlation to achieve your desired results when creating an image. 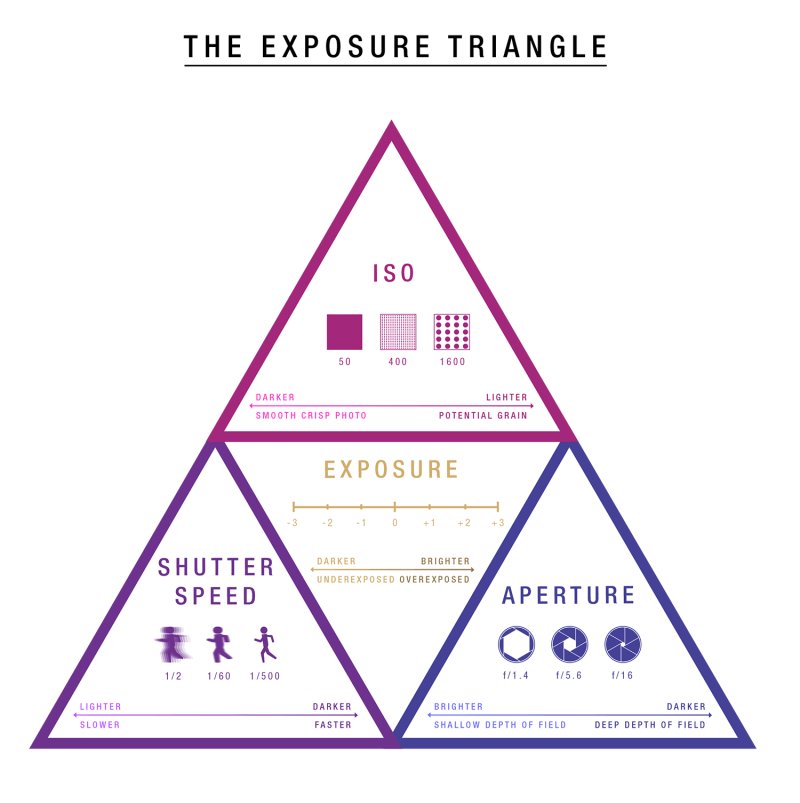 Aperture: How much light passes through the lens.

Shutter Speed: How long the light hits the film.

ISO: How sensitive the film is to light (aka Film Speed). 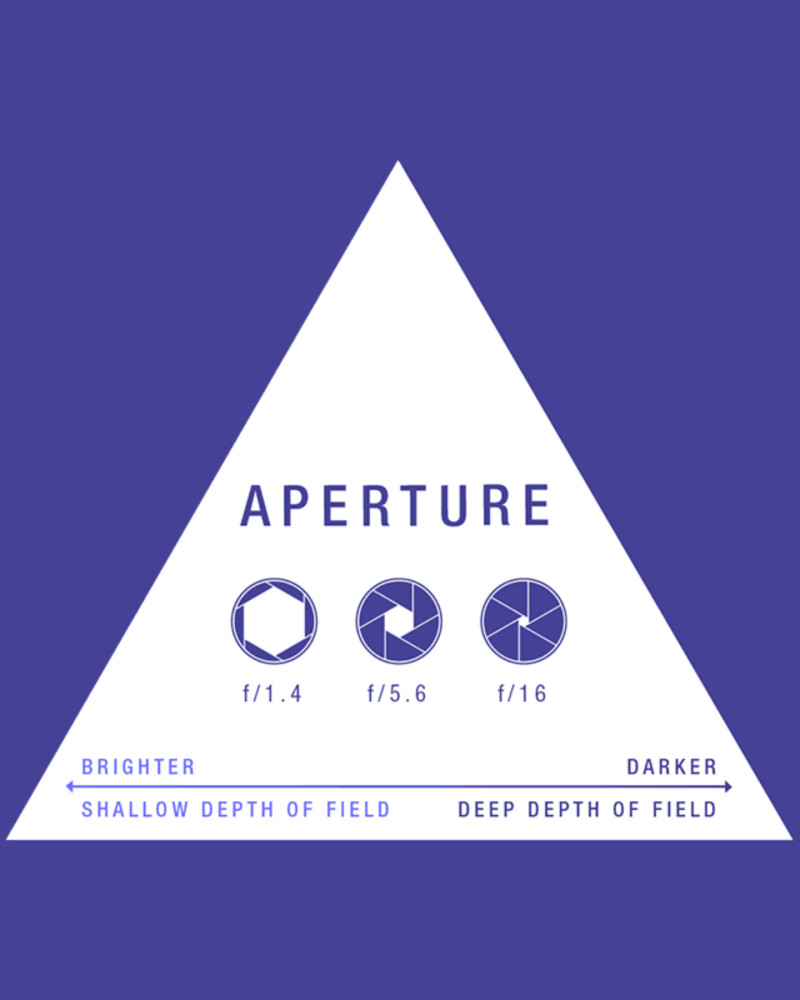 Aperture is the diameter of the opening in your lens that light passes through to the film in your camera. It is measured as a fraction that relates to the opening of the lens, and is referred to as an f-stop, where f-stop = focal length of the lens/diameter of the lens. The wider your aperture, the lower the f/number. A lower f-stop means more light will be let in through the lens, because the opening is wider. A narrower opening will allow for less light to pass through, and is communicated as a higher f-stop. 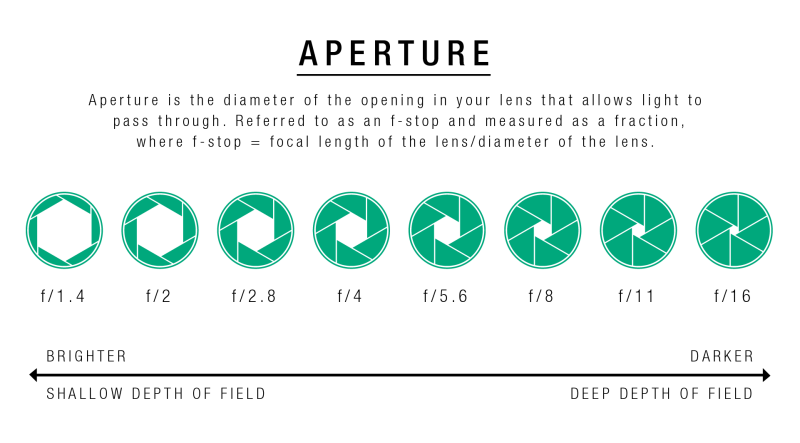 Aperture also affects depth of field. The smaller the aperture (larger the f-stop), the greater your depth of field (how deep within a scene will be in focus in your image). 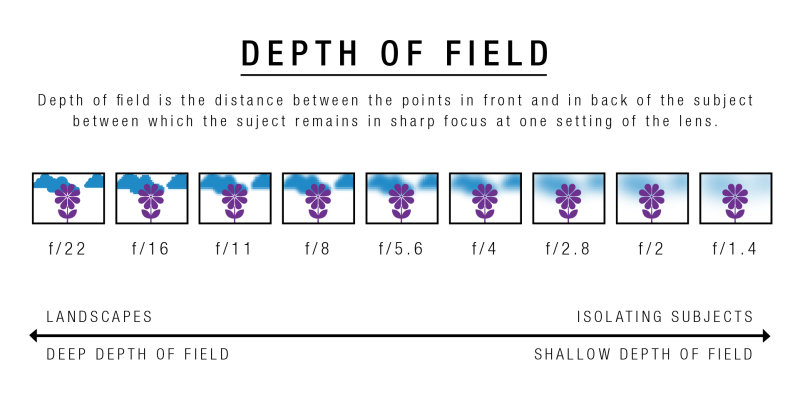 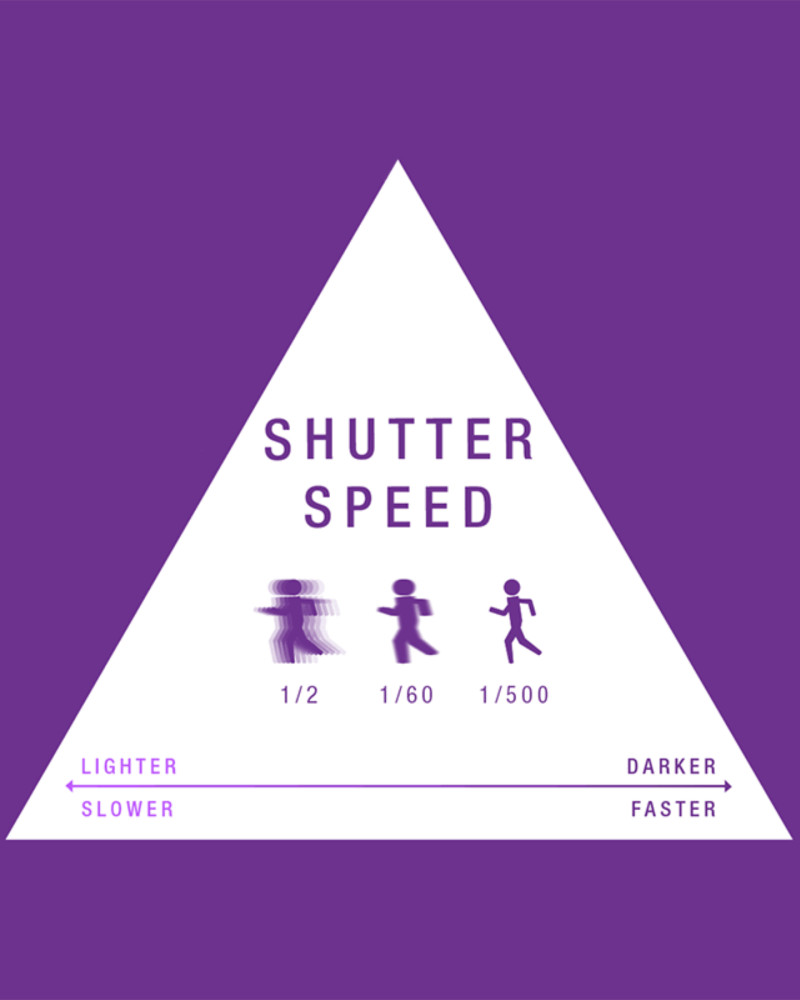 Shutter speed is the length of time your shutter is open when you press the shutter release button on your camera. The longer your shutter is open, the more your film is exposed to light. Shutter speed is measured by fractions of a second. For example, if your shutter speed is 1/30, the shutter will be open (and your film exposed to light) for one thirtieth of a second. Generally, shutter speeds increase in a (sometimes rounded) 1:2 ratio, moving from 1/4 to 1/8, 1/15, 1/30, 1/60, 1/125, 1/250, and so on. Shutter speed also affects how movement is captured in your final image. Since your image is created during the entirety of the time your shutter is open, any movement that takes place in your scene during that time will be captured in your film (resulting in blur). If you want to avoid blur and are photographing an action shot, for example, someone running, you'd want a higher shutter speed, to avoid blur (capturing the image in less time, allowing for less visibility of movement during the exposure time). 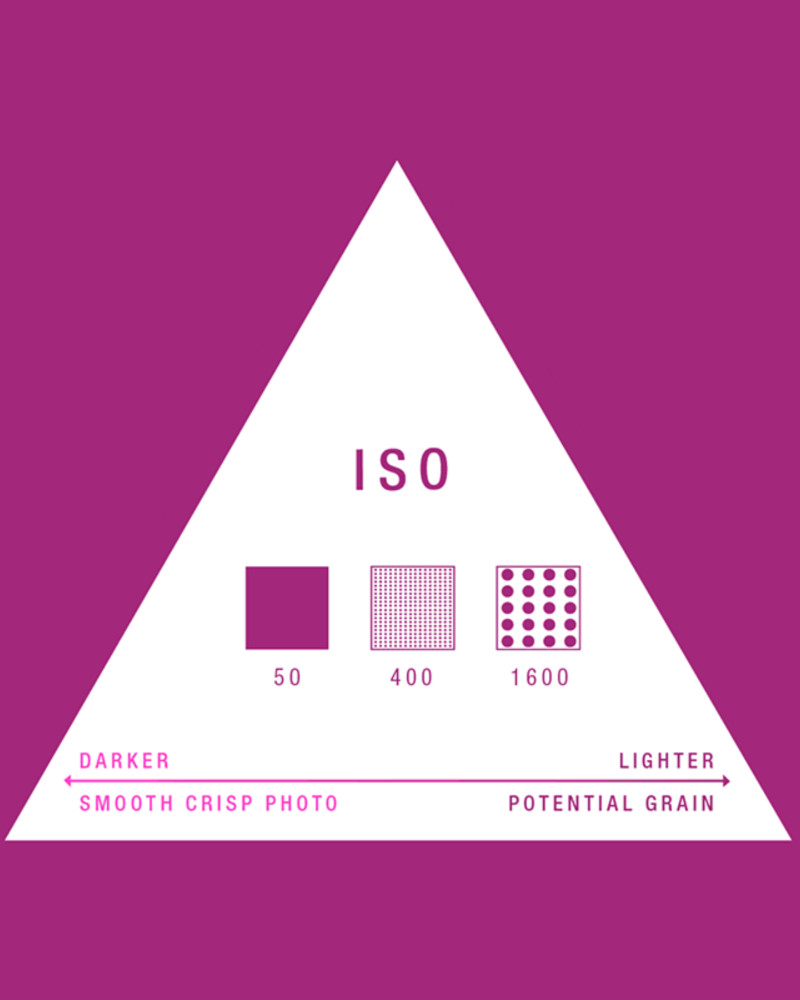 ISO is the measurement of a film's speed, defined by its sensitivity to light. The lower the film speed, the less sensitive to light and the finer the grain in the resulting image. The higher the film speed, the more sensitive to light and the larger the visible grain in the final image. Generally speaking, when shooting film, ISO will be the first variable you decide on before managing the rest of the Exposure Triangle to create the desired outcome in your final image. 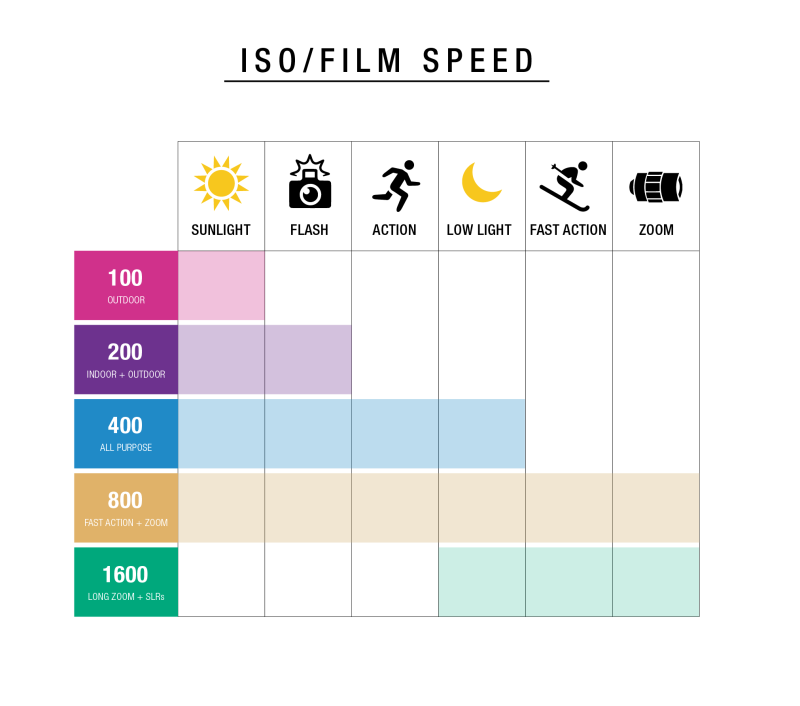 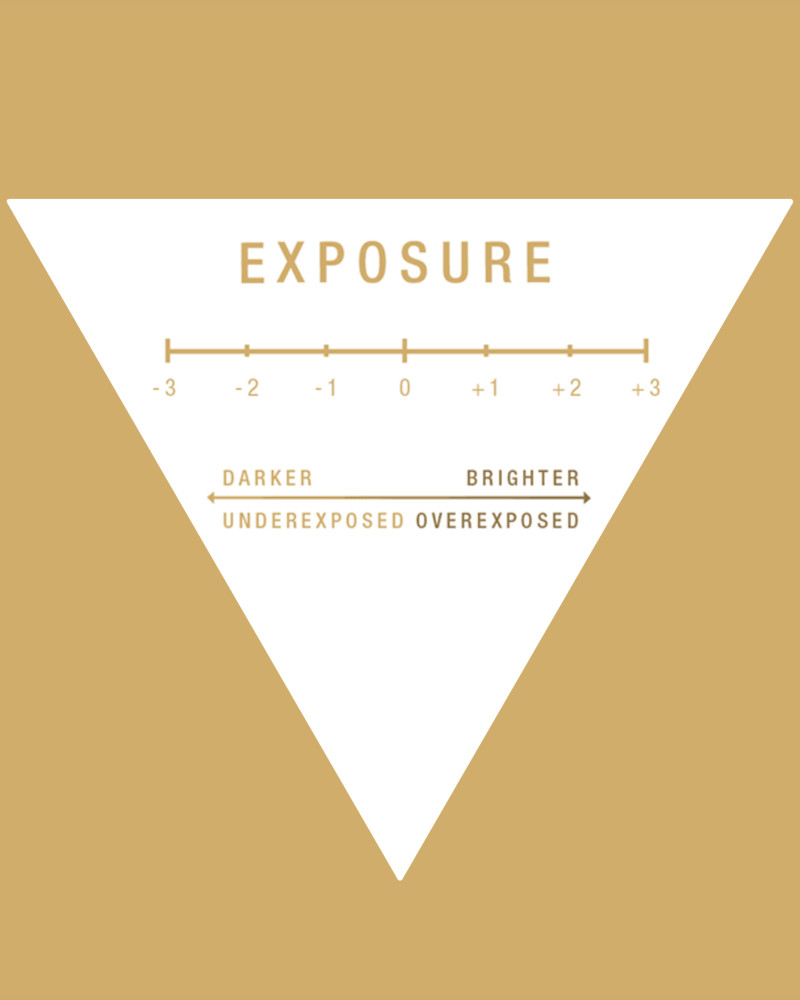 Right click the graphic below to save or open in a new tab to view larger: 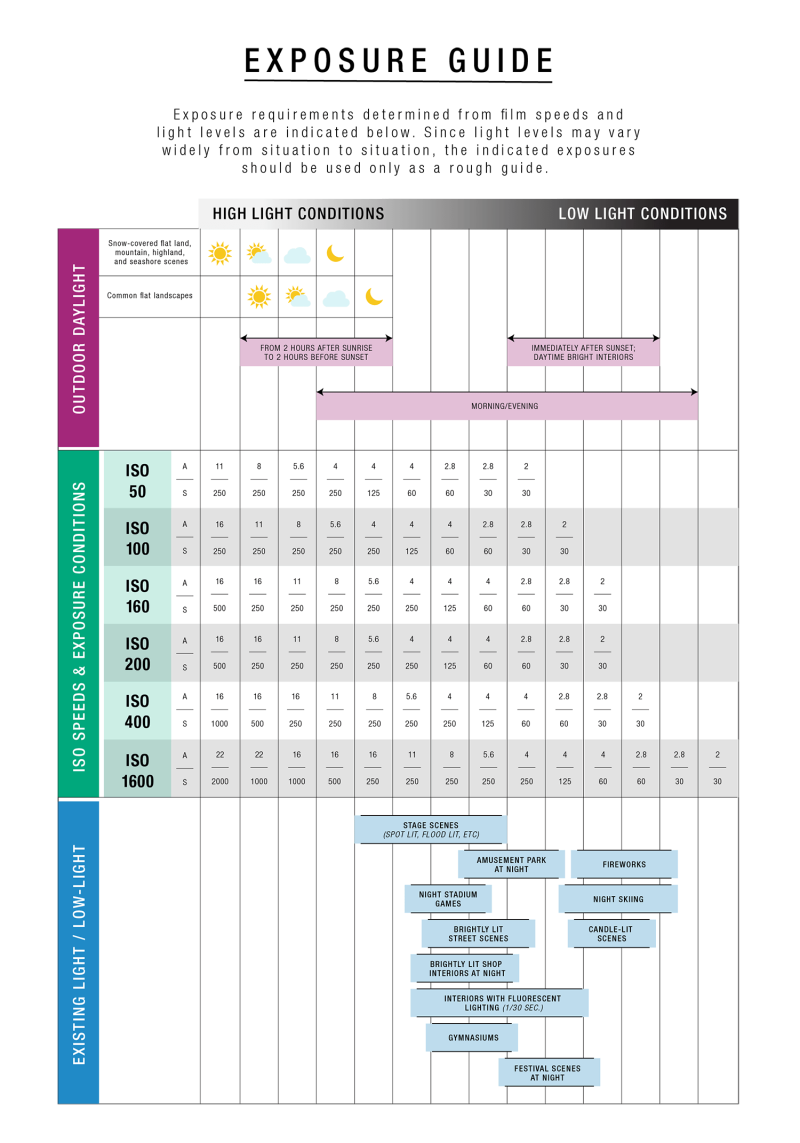